Travel back to the best memories of your childhood with Reese’s chocolate, a unique and perfect combination of chocolate and peanut butter, through a fun-filled throwback fair. Join the Rediscover Reese’s Throwback Fair on August 2, 2014 at the SM Mall of Asia Music Hall from 10:00am to 9:00pm to find out what makes Reese’s one of the world’s best loved chocolate brands.  Bring back the fun and excitement of the festival fairs of your childhood days and revisit the rich history that made Reese’s a classic chocolate brand.

Explore how H.B. Reese started his now phenomenal hit, Reese’s Peanut Butter Cups, through a series of exciting Reese’s themed booths and games that’s sure to make you love the perfect combination of peanut butter and chocolate all the more. Journey through the Reese’s themed fair trail, complete all the fun fair activities and be rewarded with loads of Reese’s chocolate products and special Reese’s merchandise.

In Take the Reese’s booth, attendees will be challenged to jump as high as they can. Reese’s Re-word Mash is Reese’s take on the all-time favorite Word Mash game. A fair won’t be complete without a ball-throwing booth, so don’t forget to check out ‘Knock Out a Reese’s Cup’. Taste that perfectly balanced sweet and salty flavor of Reese’s peanut butter cups at the Reese’s Shoot that Cup booth, where the challenge is to shoot Reese’s wrappings into the right cups.

Where there’s a fair, there’s always a Pop the Balloon booth. Stop by the Reese’s Pop A Cup and enjoy ‘Pop the Balloons with a Reese’s twist’. Love taking photos? Don’t miss the Trick or T-Reese’s where you can snap photos of yourself with the oversized Reese’s Peanut Butter Cups and Reese’s Nut Bar. Lastly, reward yourself. Hop on to Reese’s Rewards and get your free gift pack and spin the Reese’s roulette to see which branded merchandise you’ll win as a bonus!

Aside from the fun booth activities, don’t miss out on the surprises in store for you.  The fair will also feature special Reese’s infused snacks from Mrs. Fields and other food partners.  To cap off your day, listen to the infectious beat of the biggest hits of top local bands Itchyworms and Never the Strangers. Now that’s an exciting throwback fair that you shouldn’t miss, don’t you think? 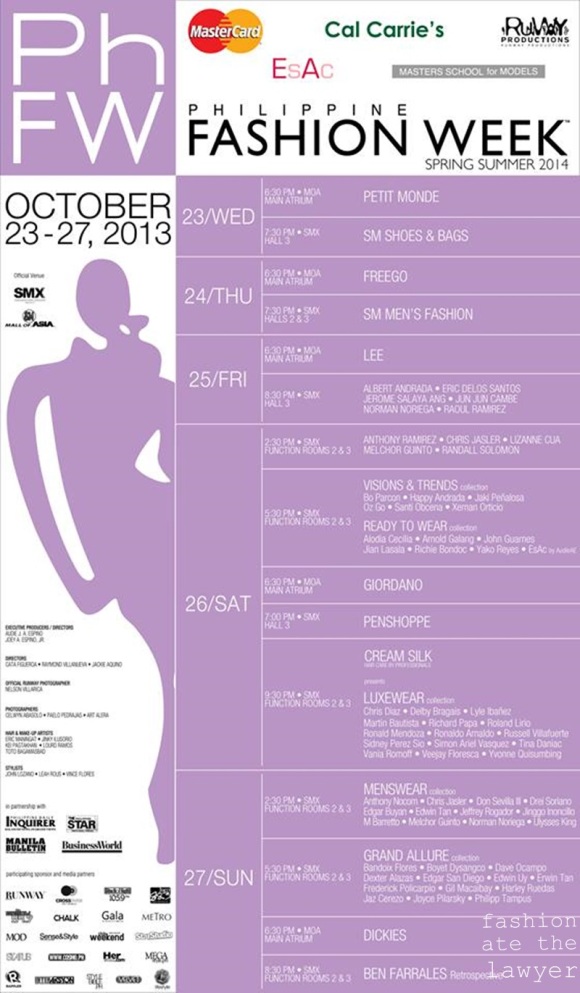 Sharing you the schedule for Philippine Fashion Spring/Summer 2014 happening October 23-27, 2013at the SMX Convention Center, Mall of Asia.

Don’t miss as your favorite biggest brands and fashion designers walk the runways.

DC Shoes has announced the highly anticipated 2013 South East Asia Tour. The tour spanning across three different countries, will bring DC’s world-renowned skate team to Philippines, Singapore, and Indonesia. On the tour, South East Asia skate fans will have the chance to get an up close and personal DC skateboarding experience through instore signings and skateboarding demonstrations. One highlight of this year’s tour is the inclusion of DC’s Nyjah Huston, who recently won ESPN’s Action Sports Athlete Of The Year award. Also joining Nyjah will be Wes Kremer, Matt Miller, Cyril Jackson, Tommy Fynn and Jake Hayes.

Anticipating the DC SEA TOUR 2013, Sammy Gosling, DC South East Asia Marketing Executive stated, “Skateboarding in South East Asia is taking off and the skate community is becoming increasingly global due to social media. The local skate communities follow the global athletes such as Nyjah Huston online so it is great for them to get an opportunity to mingle with them in the flesh. By continuing to invest in the development of skateboarding in the region we hope to see a skater from South East Asia rise to the top of the world’s skateboard rankings in the future.” 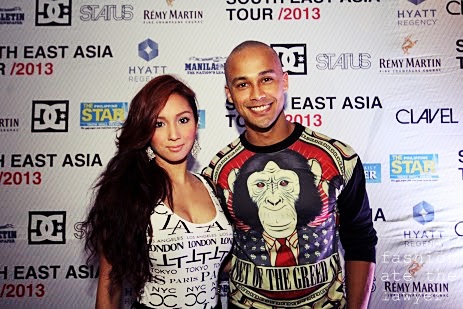 Roxanne Barcelo and Will Devaughn 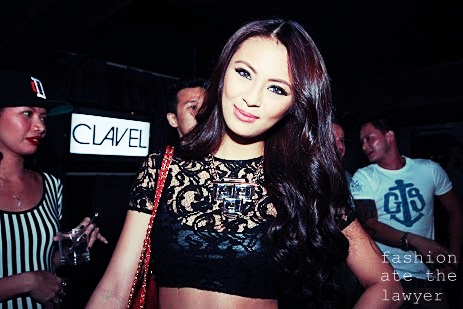 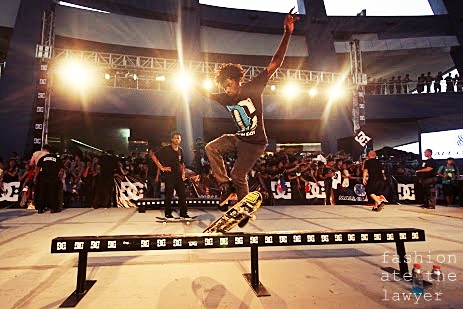 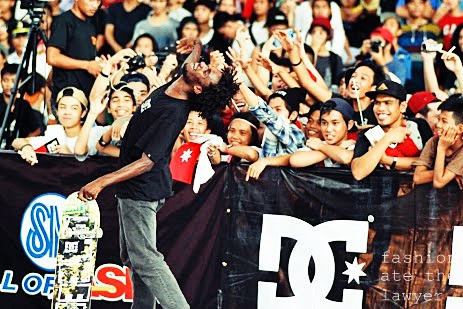 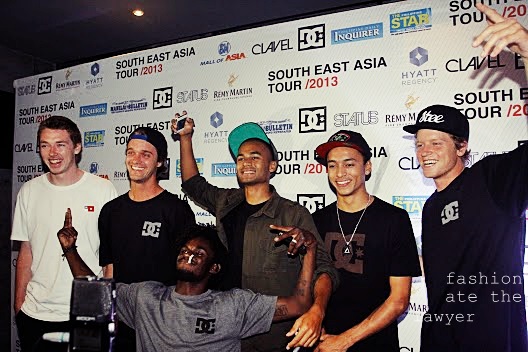 “We are very much excited with the arrival of DC’s athletes in Manila. The emergence of international celebrities and athletes visiting our country the past year has made Philippines a destination for arts, music and action sports,” shared Edilyn Yu, DC Shoes Philippines’ brand associate, “DC’s goal is to cultivate a healthy community for skateboarding and for this community to grow. The DC South East Asia Tour 2013 is for Filipino skateboard riders and enthusiasts alike, to bring the skateboarding community together and to encourage Filipinos to pursue their love for the sport, that one day, a Filipino skateboarder may join the international scene as well.”

It was so intense and at the same time exciting!
Catch them around South East Asia, their next stop is Singapore and Indonesia! 🙂

The third edition of Yahoo! OMG! Awards has been living up to its theme, Stars Rock, Fans Rule, as it received over four million votes from fans in just three weeks. Filipinos have been actively voting for their favorite stars on the Yahoo! OMG! Philippines’ popular entertainment news site since nominees were announced last June 4. 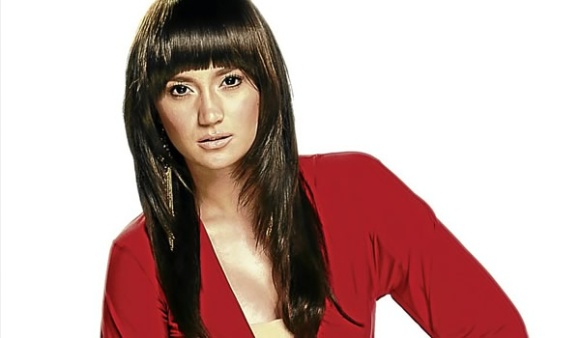 The launch was held at URBN Bar & Kitchen and was attended by celebrities and nominees such as Jasmine Curtis Smith, Eula Caballero, Tim Yap, Karylle, Jane Oineza, the Sassy Girls, Arci Munoz, Eleven O One, Philia and Abra. One of the highlights of the evening was the announcement of the first OMG! Media Magnet who went to international singing sensation Charice Pempengco.

Kate Delos Reyes, Yahoo! Philippines’ Country Manager and Country Editor said, “We are very pleased for the rapturous response of the fans based on the number of votes the OMG! Awards has received, so far. This is proof that Filipinos are passionate in keeping abreast with entertainment news and they go to Yahoo! to have that daily connection with the content they want.”

Mike Constantino, Yahoo! Philippines’ Deputy Country Sales Director added, “In recognition of the contribution and influence the fans hold, Yahoo! Philippines is bestowing them the power to support their favorite celebrities voting through the OMG! Awards via online, mobile and SMS.”

The Yahoo! OMG! Awards 2013 honors the Philippines’ most promising celebrities and breakthrough artists who have been the most searched on Yahoo! Philippines’ and who have captured the audience’s attention over the past year.

One hundred six nominees are vying in 22 categories this year. Some celebrities have already shown a strong standing in the polls in their respective categories.

Fans are encouraged to continue voting and spread the word. Voting for nominees is open online and via text messaging OMG HELP to 2910 to all networks until July 12, 2013.

The winners will be revealed on awards night, July 19 at the Mall of Asia Arena. 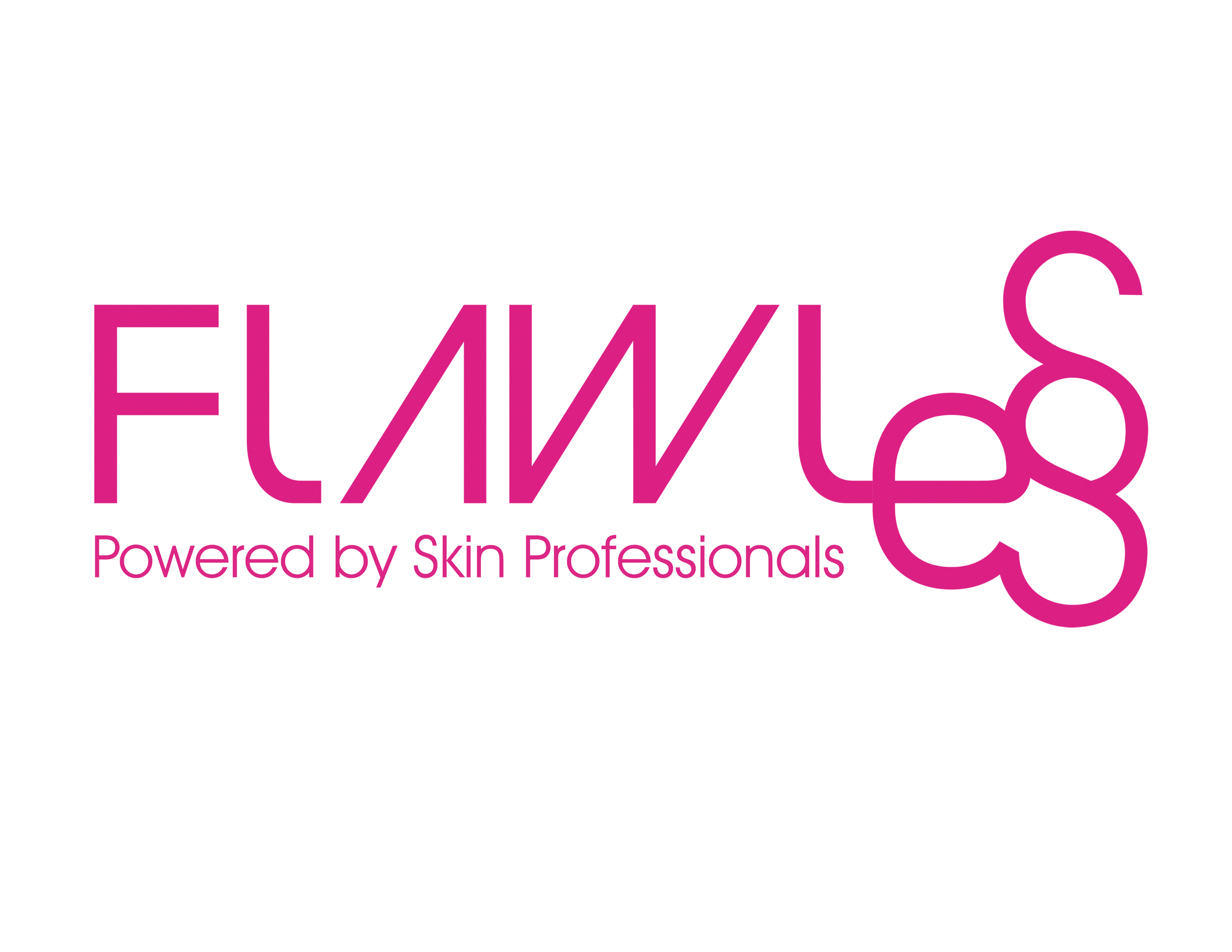 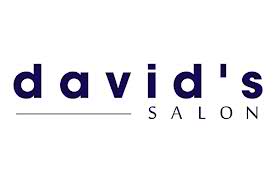 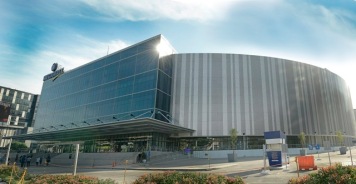